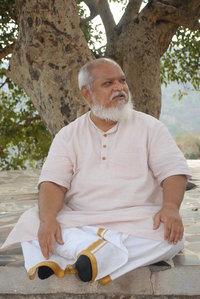 Sai Kaka was born on the auspicious day of Janmashtami* in a place called Sangli in the state of Maharashtra in India. His childhood name was Mohan and from the initial years of his childhood, he was inclined towards spirituality. At the age of 3-4 years, he used to say that he would go to Uttarkashi, not even knowing at that time where Uttarkashi was. Even his family knew only this much that there was place in Uttar disha (northern India ) called Kashi. At that age he used to have glimpses that his present mother Saraswati Devi was also his mother in his past life. He used to like the company of saints and sadhus and , at the age of seven he asked one of the Sadhus that when would he find his Guru and how would he recognize him? That Sadhu replied back that around the age of 18-20 years he would meet his Guru and at first glance only he would recognize him as his Guru. He didn’t have any idea then how and where this question erupted in his mind nor did he meet that Sadhu again.[/one-half-first]

[one-half]Young Mohan had a special affection for Shirdi Sai Baba and for him it was like he had been related to him for numerous past lives. Mohan was a very bright student in his school and the favourite of both his teachers and classmates. He was ambitious and wanted to be an engineer as he had a good knowledge in Mathematics and Science. However, his inner voice and destiny was showing a completely different path, that of spirituality. At that age, he used to find solitude either at the bank of river Krishna or at the cremation ground or in a room on the first floor of his home. At such a young age, he read about Swami Vivekananda, Ram Krishna Paramhansa, Shri Arvind and many other great spiritual masters. He always wished that like Swami Vivekananda, he too should get a Guru like Rama Krishna Paramhansa who could show him the path to enlightenment. He was young but at the same time eagerly waiting to reach the age of 18-20 years to meet his Guru. Till then his journey continued by meeting numerous Saints and Sadhus like Swami Swaroopanand , Gulwani Maharaj, Nisargdutt Maharaj and many other great saints. [/one-half]